Banner Island Ballpark | Kids Out and About San Jose 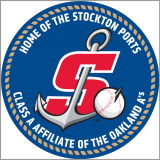 Address:
404 W Fremont St
Stocton , CA , 95203
Phone: (209) 644-1900
37° 57' 21.888" N, 121° 17' 53.1024" W
See map: Google Maps
https://www.milb.com/stockton/ballpark/banner-island-ballpark?_ga=2.180839011.55...
info@stocktonports.com
Contact name:
Information
Business/organization type:
Outdoor Fun
Outdoor Sports Team
What our organization offers:
Live performances
Recreation / Games
Subjects / Categories:
Nature/Outdoors
Sports
Baseball
Arts: Performance
Ages for which our activities are most appropriate:
All Ages
Adults & kids together
Adults without kids
Banner Island Ballpark was built by the City of Stockton, and was designed by HKS, Inc. The ballpark was built as part of the revitalization project for the Downtown Stockton Waterfront area, and was built concurrently with the Stockton Arena. The Banner Island area is allegedly the home of the Stockton baseball team which played in the late 1800s, in an area known as "Mudville" along the San Joaquin River. Banner Island was once an island in the San Joaquin River delta. Although the area is no longer an island, the name remains. Because of the history surrounding Banner Island Ballpark, the stadium was given a historical certificate and named a historical site on August 10, 2008 by the Stockton Cultural Heritage Board. Banner Island was not only the home of professional baseball in Stockton, but also the site where Charles Weber flew the flag to celebrate Union victories during the Civil War (hence "Banner Island"), where Coxey's Army was camped in 1893, and where World War II ships were constructed. The Stockton Ports are proud to be part of the history of Banner Island.
Click For More Information

You have no education resources added; you can add one here.